I've read several posts where people reuse the skins in their wines. I'm going to be transferring a cranberry wine (3 pounds of cranberries) into secondary soon, and I was wondering how much they'd flavor another batch if I reused them in like an apple wine. (So essentially add a gallon of apple juice and use the "spent" cranberry skins as the base). There's also a pound of raisons in the bag as well, and I wouldn't be separating those out.

Do all used pulps work equally well in flavoring second batches, or would I be wasting my time using these skins with apple juice? I guess juice is relatively cheap, so I might try it, but I'm curious if anyone else has experience using the cranberry pulp for a second batch of something.

Also I don't have an acid test kit yet, so I'm not sure if I'd need to add acid with the reused skins. I guess I should break down and get one if I'm going to start experimenting more like this . . .

Go for it! I reuse muscadine skins with niagara wine and it comes out really good. Do a taste test to see if you need to add acid
C

I am a huge fan of cranapple wine. I would prob even add some extra cranberries in there, or use a can of frozen cranberry juice concentrate as part of the needed extra sugars. It is a good idea to use Lalvin 71B yeast since youir malic acid will be pretty high, but 71B really cuts thru the malic and will make the wine pleasant to drink much sooner.

cintipam said:
I am a huge fan of cranapple wine. I would prob even add some extra cranberries in there, or use a can of frozen cranberry juice concentrate as part of the needed extra sugars. It is a good idea to use Lalvin 71B yeast since youir malic acid will be pretty high, but 71B really cuts thru the malic and will make the wine pleasant to drink much sooner.
Click to expand...

Thanks for the suggestions. I'll try it an see how it comes out. But I probably need to wait a little bit. Running out of gallon bottles!

Julie said:
Go for it! I reuse muscadine skins with niagara wine and it comes out really good. Do a taste test to see if you need to add acid
Click to expand...

I may have to try this next year.

dralarms said:
I may have to try this next year.
Click to expand...

So this last weekend I went ahead and started my 1 gallon batch of cran-apple wine. I had 6 oz of cranberries left, so I threw those in as well as using the skins (that started as 3.5 pounds before fermenting my cranberry wine). Used Mott's 100% apple juice (it was from concentrate, but no sugar added). I couldn't find any frozen cran-apple concentrate. Added enough sugar to make the SG 1.086, which was just over a pound.

I have no idea if I'll need to add any acid or not. I'm not quite sophisticated enough yet to tell. Used Lalvin 71B-1122 yeast since it was what I had on hand, so nice to know it might help!

My only disappointment so far is that the color isn't quite as red as I hoped. But it has a few more days before I take the skins out, so I hope it will still get some more color. I'll try and get a picture in the next day or so.

As an aside, I had an number of different wines (primarily country ones) that I wanted to try when I started out this hobby several months back. I have bottled 2 (Dragon Blood, apple wine) and have several more in bulk aging (Blackberry port, blueberry, cranberry, a one gallon pinot noir kit, and a gallon of JOAM). Most of these I won't be drinking in the next 6 months, and several will take a few years I guess to fully come in to their own. But once I start bottling some of these, I'll have a few empty gallon jugs that should probably be filled with *something*. But I have no ideas what else I want to try and make! I'll have to see what kind of inspiration I can find . . .
Last edited: Mar 18, 2017

So it's been several months since I started this. The final SG reading was 0.994. I had some leftover cranberry wine from my initial batch, so that was used to top off this one which made it a bit more red.

It's still not 100% clear, but that seems to be almost universal with all my batches made with apple juice. That just doesn't seem to clear as quickly as my other wines. (My Apple cider and my apple cyser seem to do the same thing.) I added a little more pectic enzyme to it today to see if that would help.

I also backsweetened it to 1.010. To back sweeten I dissolved 1/2 cup granulated sugar into 3/4 cup Trader Joe's 100% cranberry juice. I didn't mean to take it quite that high, but I apparently didn't correctly account for the sugar in the cranberry juice. But I like the taste right now, so I think I'm good! (My straight cranberry wine wasn't back sweetened quite as much, so it's a bit more tart than this one.)

My plan now is to wait a month and hope that this clears up a bit more. My straight cranberry wine (which I also stabilized and back-sweetened today) looks really clear, so I hope in a month they'll both be clear and I can bottle them both. And then wait for the fall to enjoy!

The cran-apple is the one on the left, compared to the straight cranberry on the right. 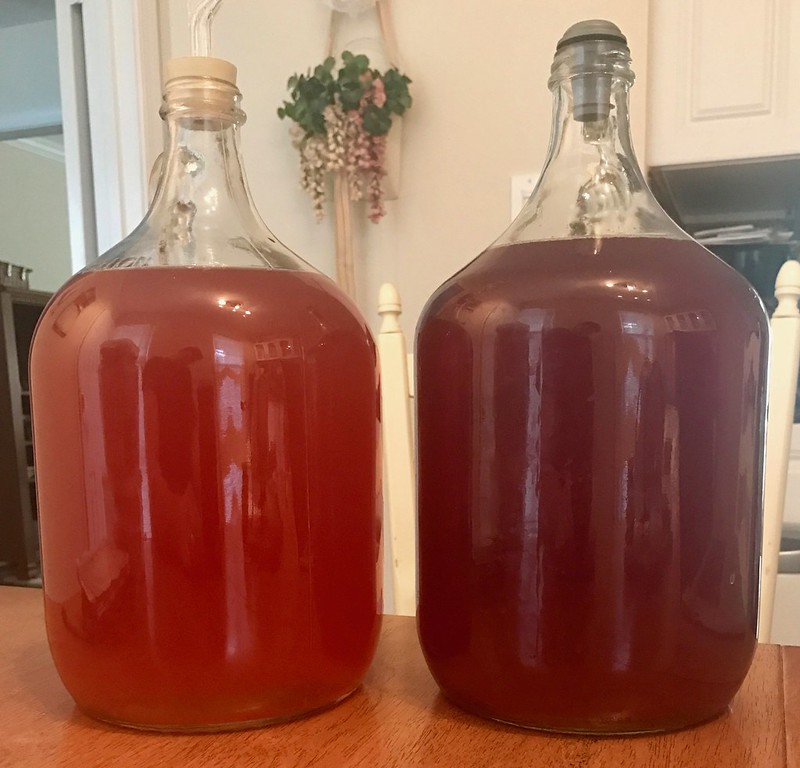 I'll admit neither one looks very clear right now! I may have picked up too much junk of the dregs when I transferred the cranberry. I'll definitely let them both settle a lot before I think about bottling.

So it did clear up eventually. Bottled this last weekend, and snuck a taste. This might be my favorite wine so far, which was not what I was expecting! At least it's coming across as an early drinker.

Not sure I can easily replicate, since I was using the skins off of a cranberry batch. But I might do it again with full cranberries. If it's close I'll be happy.

Our local walmart has a cranberry juice concentrate that has apple juice in it. Iv sweetened with it
Adds nice color too

In case anyone cares, here's what I did.

Started with the skins of a cranberry wine batch. That was the skins from about 3.5 lbs of cranberries.
1 gallon apple juice
1/2 lb new cranberries
1 pound 2 oz sugar
Pectic enzyme
Energizer
Nutrient
71B Yeast

I also topped it off once or twice on transfers with some of the cranberry wine, since I had a little over a gallon of that as well.

I doubt I can recreate it exactly. It's a shame, since I'm liking it a lot!

Next Batch Will Be…..