This year's practice at propagation

Started back mid-january, so this is a catch-up post.

Started back last year, and have been patiently waiting to work on practicing my grafting and rootstock preparation. Had some luck, actually! 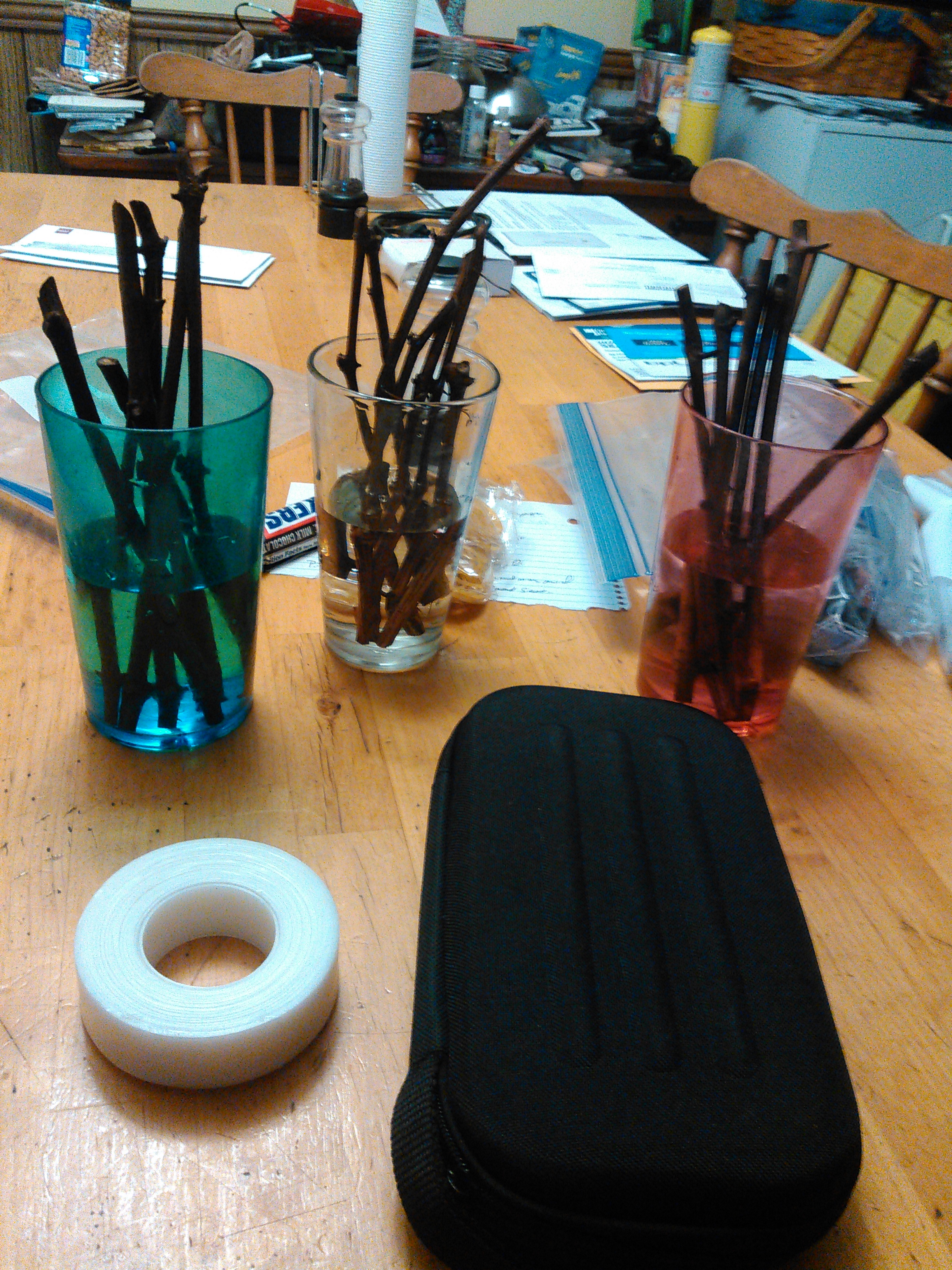 Cuttings are kept in damp paper in the fridge all winter, pulled out, and stood up in glasses of water for a few hours. Not submerged, just standing. Once re-hydrated, they get a hot water dip at 150F for thirty seconds. A quick dunk in cold water to stop any cooking, and rootstock gets disbudded. 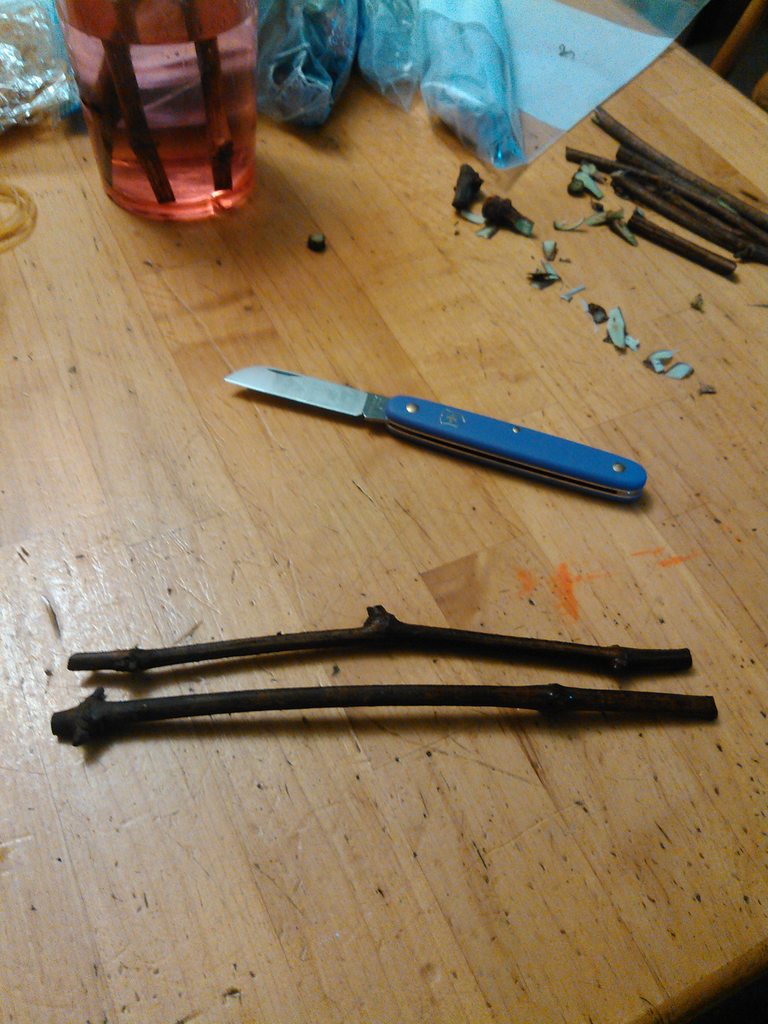 The victrinox florist's knife is a revelation in this kinda work. Get one. They're so good you don't know how bad your current knife is for this kind of work, until you have one. 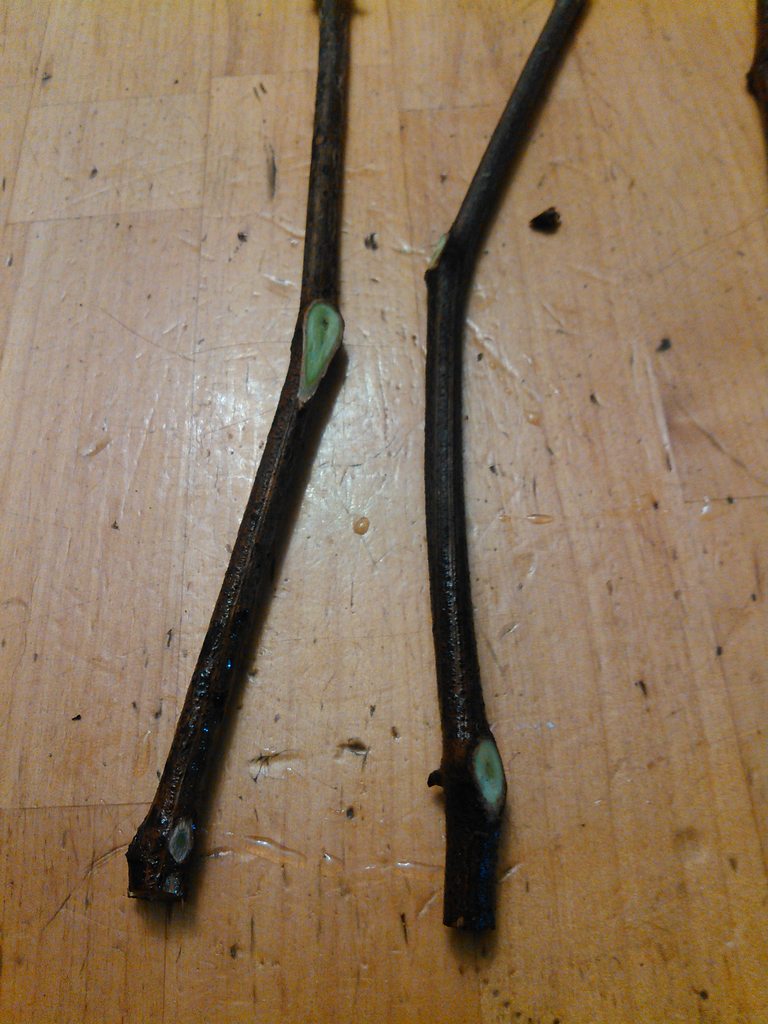 Slice off the buds carefully-if the cuttings are not fully hydrated and the knife not sharp enough, they'll tear off. Also happens sometimes even if you get everything else right-not a big deal unless it's high up on the cutting. 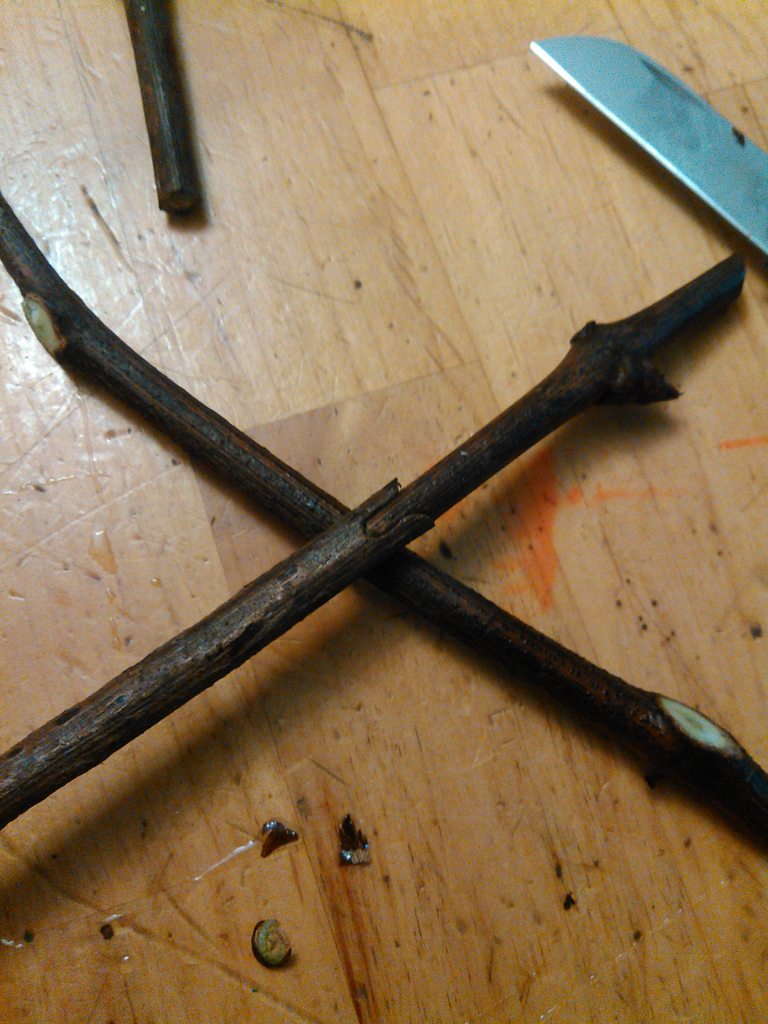 A cheap grafting tool, carefully honed, makes an OK cut. Matching up at least one side is extremely important-the better the match, the better your luck when callusing. 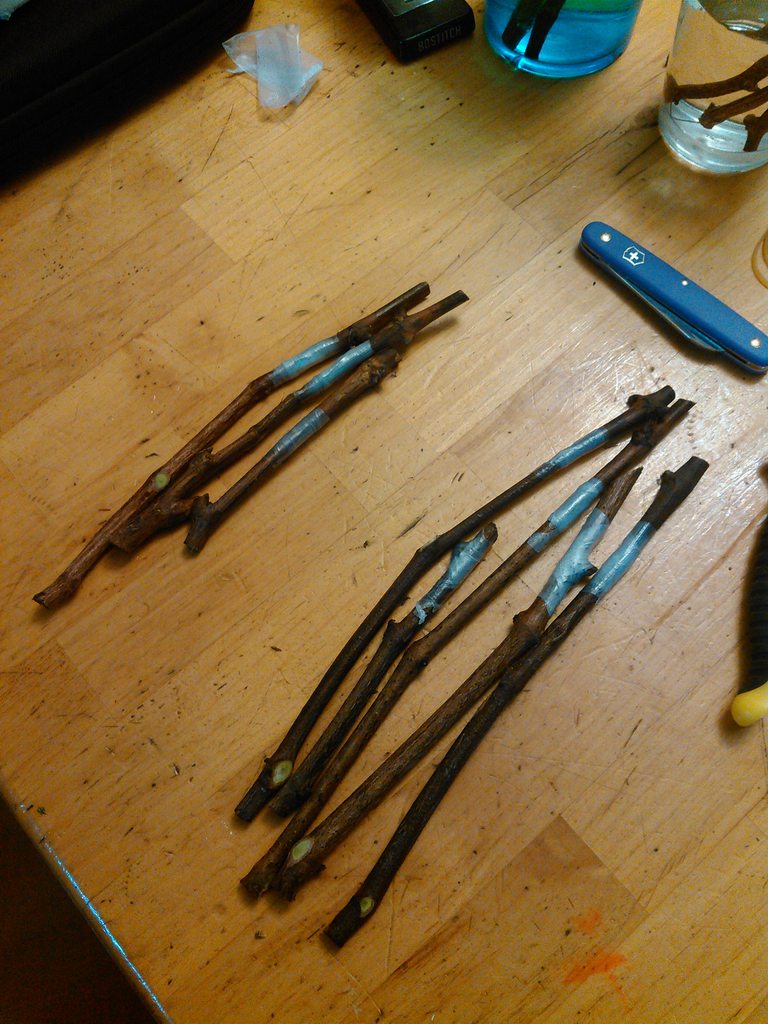 After the graft is matched, it gets taped. This is parafilm grafting tape, a paraffin based tape that is slightly elastic and self-sealing if stretched and rubbed under a thumb.

I wish I had some photos of other graft cuts-I'm not great at it but I have some Omega cuts, some whip grafts (no tongue, pinned with a stapler), and some chip buds. The chip budding is SO MUCH easier to do with the victrinox knife, and even then I have a hard time getting the back cut straight. Even a slight curve is enough to cause a failure.

After all this, the cuttings are put into a zip-top bag full of damp peat moss, but not completely sealed. Layed on a heat mat, and covered with a folded bath towel. Set the thermostat for the heatmat at 85F for two weeks, and then checked for callus tissue. 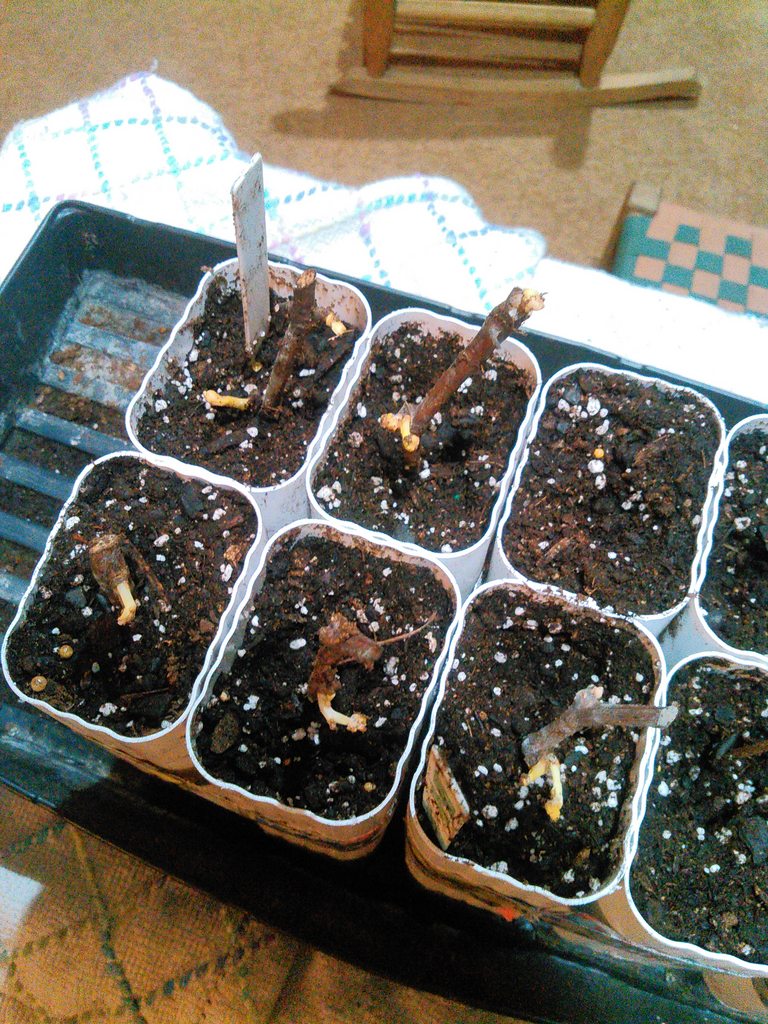 Once callus has formed, which looks like dirty cauliflower, roots will form from it at lower temperatures than formation requires, so into the grow tubes it goes. I use lengths of plastic gutter downspout, cut to 8" long and using mesh taped over the end to hold the dirt in.

If you do not wax the white, tender shoots that sometimes form while in the callusing bags, they'll dry out and shrivel up when you take them out, unless you dip them in wax. I goofed on this first round, but they're coming back out. Remember, grape nodes form three buds, but if the first one dies it still takes energy out of the cutting to grow that second one out.

Thanks for the tutorial! Couple of questions. Where do you find that tape, and what kind of wax are you using on the roots? Grafting wax perhaps? I would assume parifine would be too hot for tender roots in it's melted state! Thank you, Lee
E

I never thought of wax dipping the roots! But a great idea!

When I get ready to get into grafting I am definitely coming back here to read this, many thanks!
X

Only the shoots! Any white shoot growing from a bud that will eventually become a cane is dipped.

When coming out of callusing there are usually no roots...that's why those white shoots will die, no way to intake water.

Just regular parrafin wax. Melted and held at 140F or lower. Dip in wax down past the graft union, then a dip in cold water.

I'm currently at 80% strike rate on the grafts, and 84% on rooting cuttings.

The tape I buy on Amazon, but real Parafilm is wax based. Not the cling-film tape often sold as grafting tape-it can work too but I've never gotten it to work.

I think I cooked mine during callousing...
X

Callusing occurs between 78 and 88F, below 76 callusing does not occur hardly at all, and above 88 the callus tissue is so soft it will break off and not form a proper union.

Here's a chip bud graft, Andre grafted onto 101-14MGT, that has just swelled enough to split the wax case: 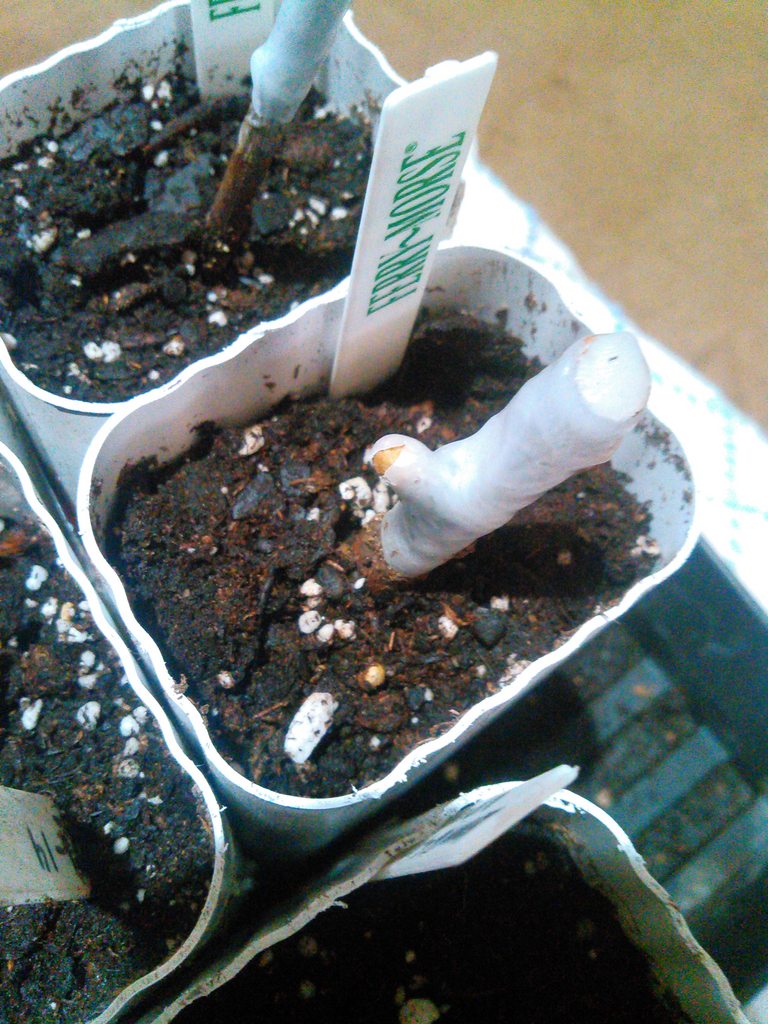 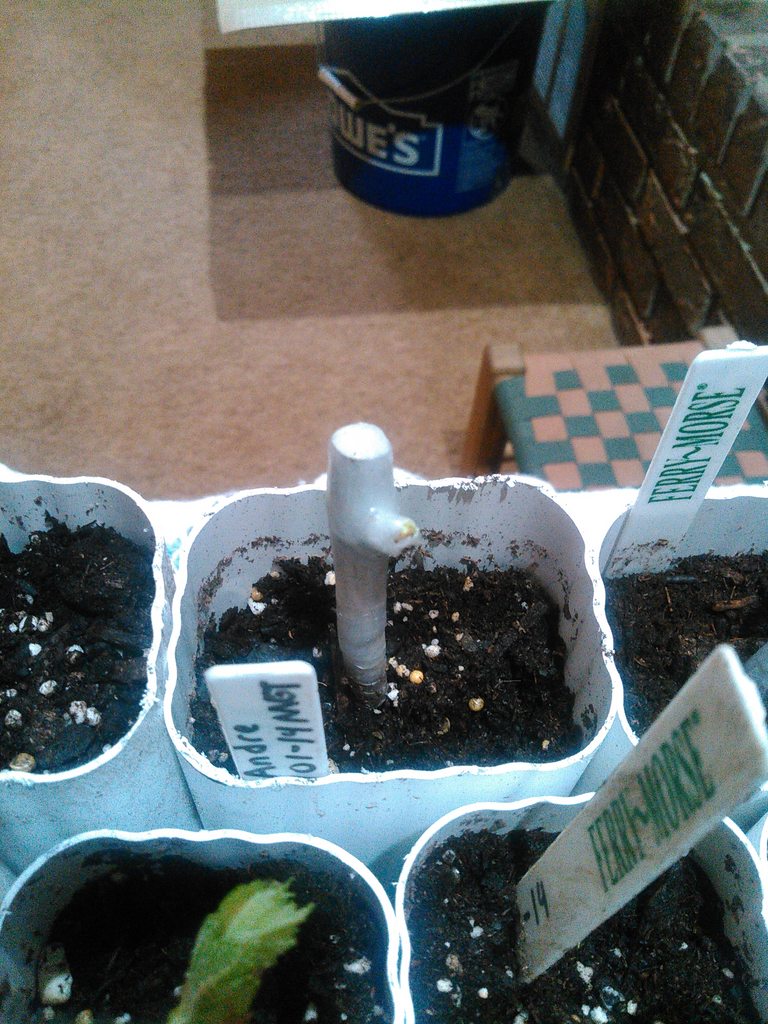 And another, this one split the wax 2 days after being transplanted: 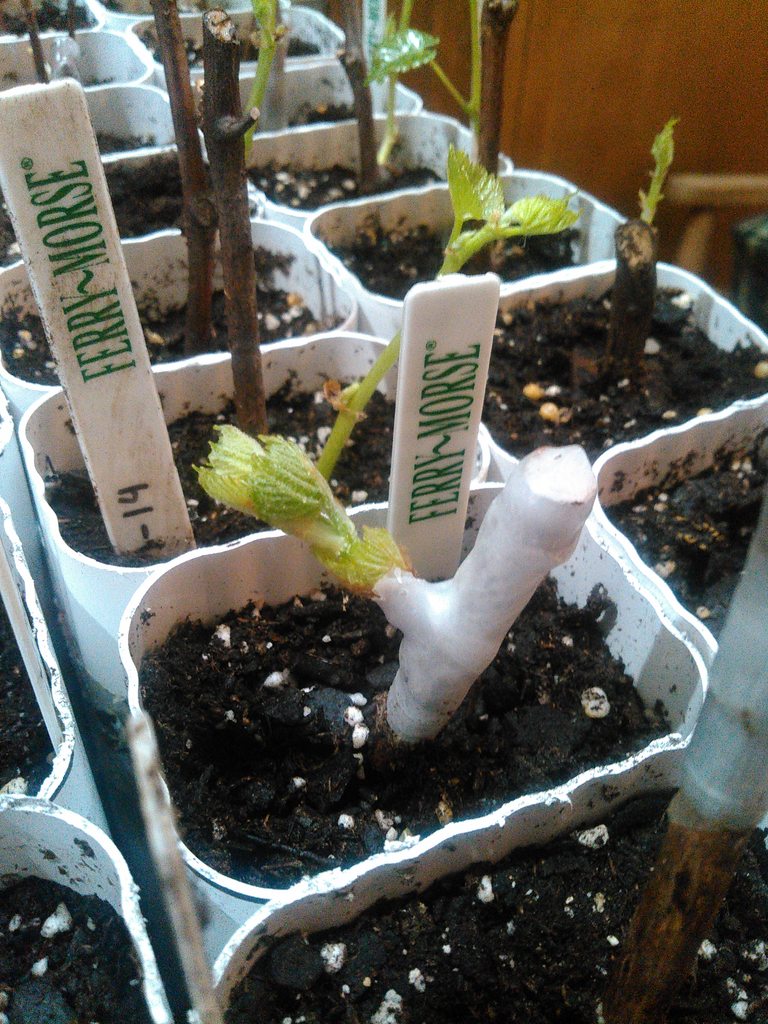 This one, an ungrafted 101-14MGT, has decided it's time to make grapes: 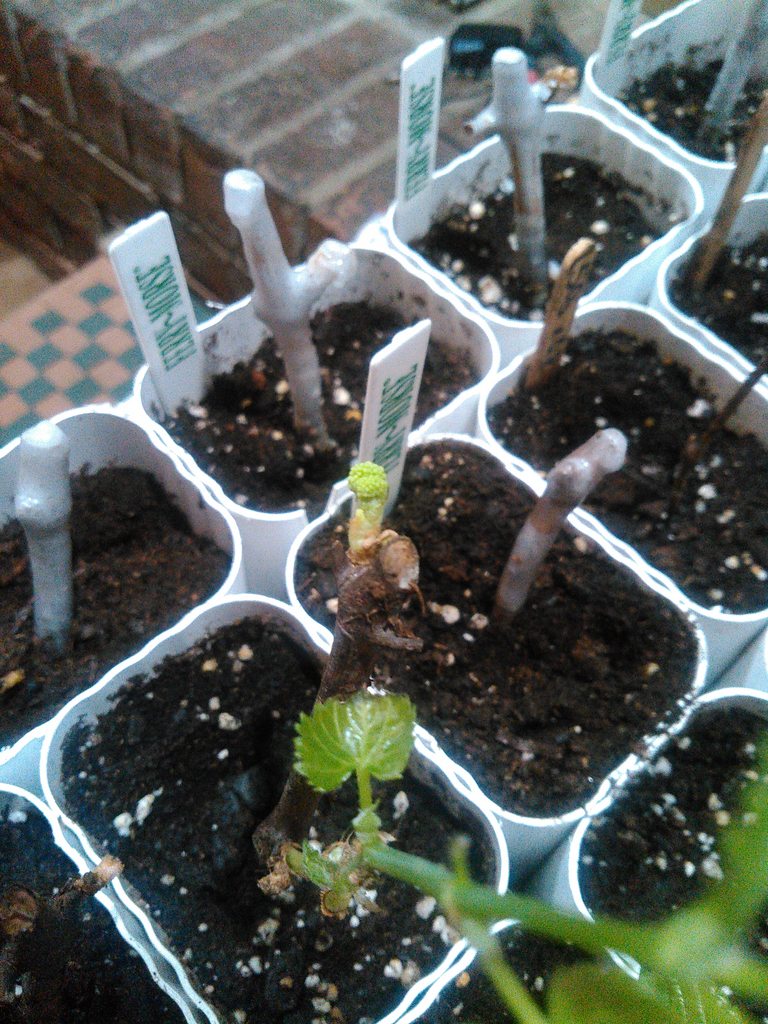 That top bud was a fruiting bud, it'll grow out a cane but I'll pinch off that inflorescence once the cane grows out a bit.

You can see, that it took almost three weeks for some of the unwaxed cuttings to drop the white shoots that died back, to grow out a second bud. And of those, one of them has dried up, since it pushed that second bud before growing roots. 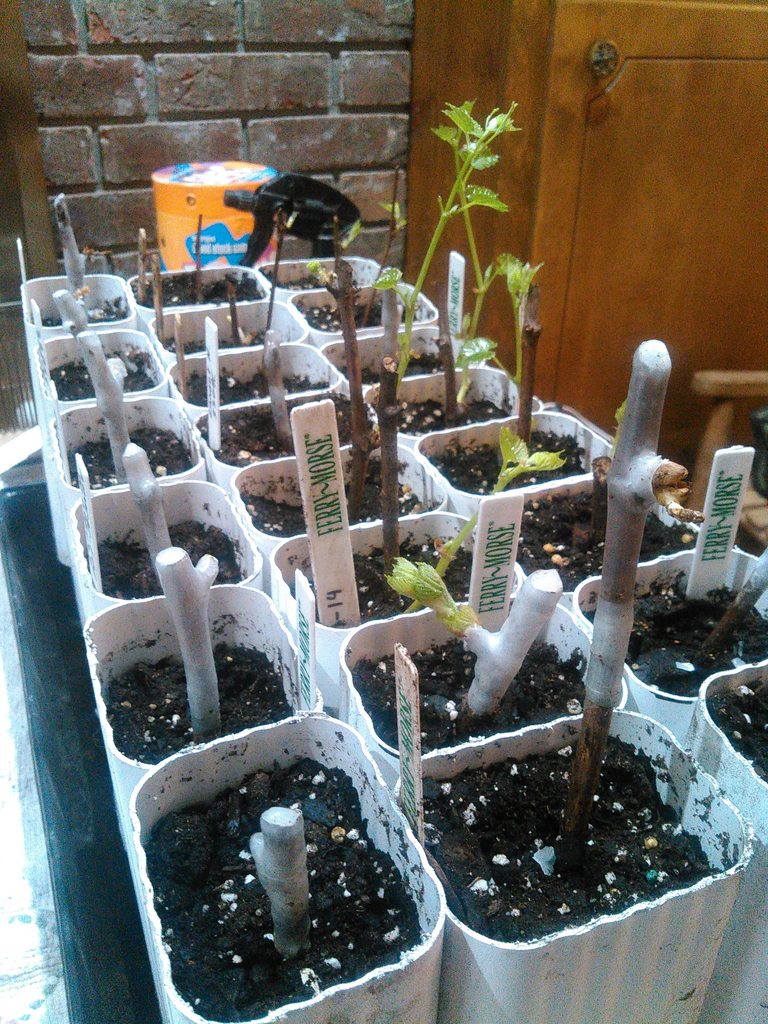 Also in the foreground, a cutting that had swelled the bud in the callusing bag that was too wet. You can see how it trapped moisture in the wax, but then when it broke out it grew out and dried up-it didn't have enough root to absorb the water needed, or the graft union was not healed well enough.

I've yet to prune, but I still owe you some cutting (along with efbobby). I hadn't forgot..
X

No worries. Its almost warm enough to move the callusing box out to the garage, and get the lights on them.
X

So far, only two grafts have for sure taken. Of those, one of them might or might not have roots, and the other definitely has some roots-so we'll see how things keep going forward.

There's still a long way to go yet, before I can call any of them a success.
E

Far as me no rush I have PLENTY to do but I will admit I am excited to see this giant sand grape
of yours!

I like the process for the wax tips and plan to integrate it. I think it will work well with the high rh.
E

Would this technique work on green cuttings?

Not the buds persea but the stem/cane?

Related: if so what would be the minimum diameter to use it on?

My inclination is minus the buds the wax could act as a temporary bark to help keep the fluids from exiting the cutting as fast.
X

Not to my knowledge. Green cuttings must have at least 1 leaf, and pretty well need to be done under mist, the way you are doing it.