2020- The year I figure this propagation thing out.

It's been a wild ride so far, but things might settle down a bit now. I started 2020 way back in november of 2019, collecting cuttings and budwood where I could and practicing grafting cuts and ties. I tried in the summer of 2019, but didn't have any success with green grafting, so this past winter was the first real run at dormant bench grafts. Out of hundreds, I had zero eventual successes. Not without some hope though-at times, I had foot-long new canes of chip buds, I had fully-rooted rootstock and no top growth, and a few that just never did anything. Some grew, healed, rooted, and were alive and well until March!

But then the dog came, and that four-legged chainsaw finished off over 200 graftings and cuttings, and ripped out and chewed up all but two vines in my yard, in a matter of hours. And then the late spring freeze. And then a second, very late frost!

Needless to say the dog is unwelcome now, but as I searched the yard for the shards of vines and cuttings, I figured I'd just stick them in the dirt. Worst case, just throw'em out later. One of my 3309C rootstock plants was chewed off 12" from the dirt, so I cut it off cleanly, and attempted a field graft. The graft didn't take, but instead the vine exploded in growth with about 40 new canes busting out from one spot. 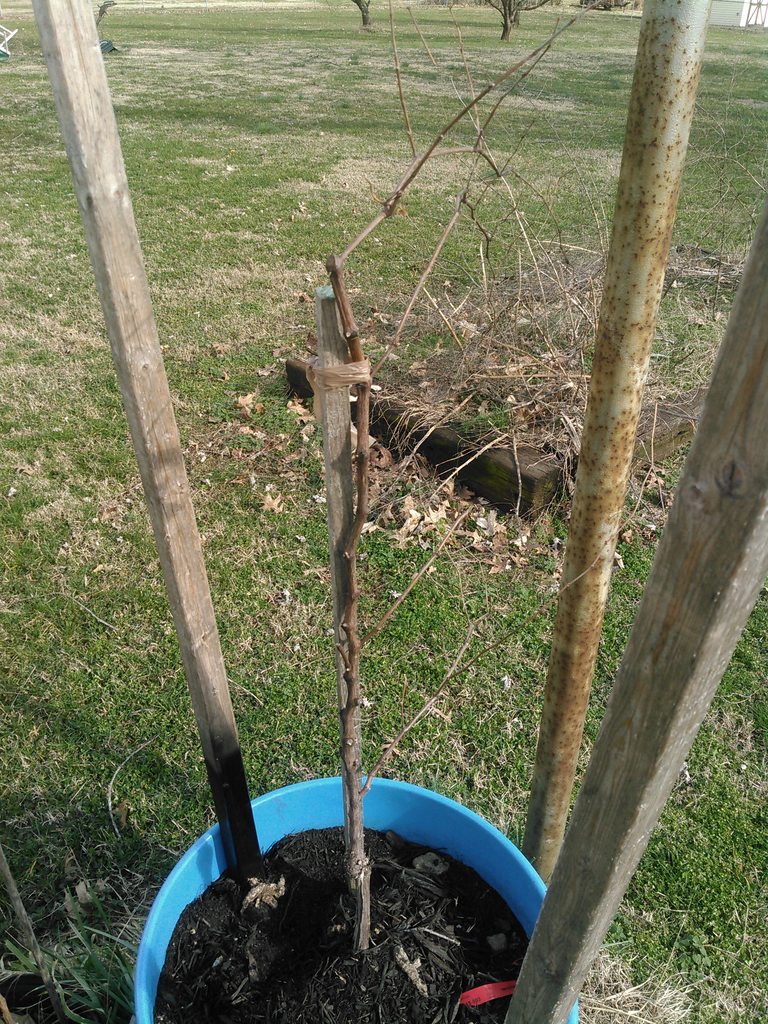 got chomped off about 10 inches above the dirt. I cut it back to clean it up and give it a chance, stuck a scion in it, but then we had a late frost that killed the scion.

This morning, I decided enough was enough, selected 1 cane and staked it up, and am thinning the rest down. 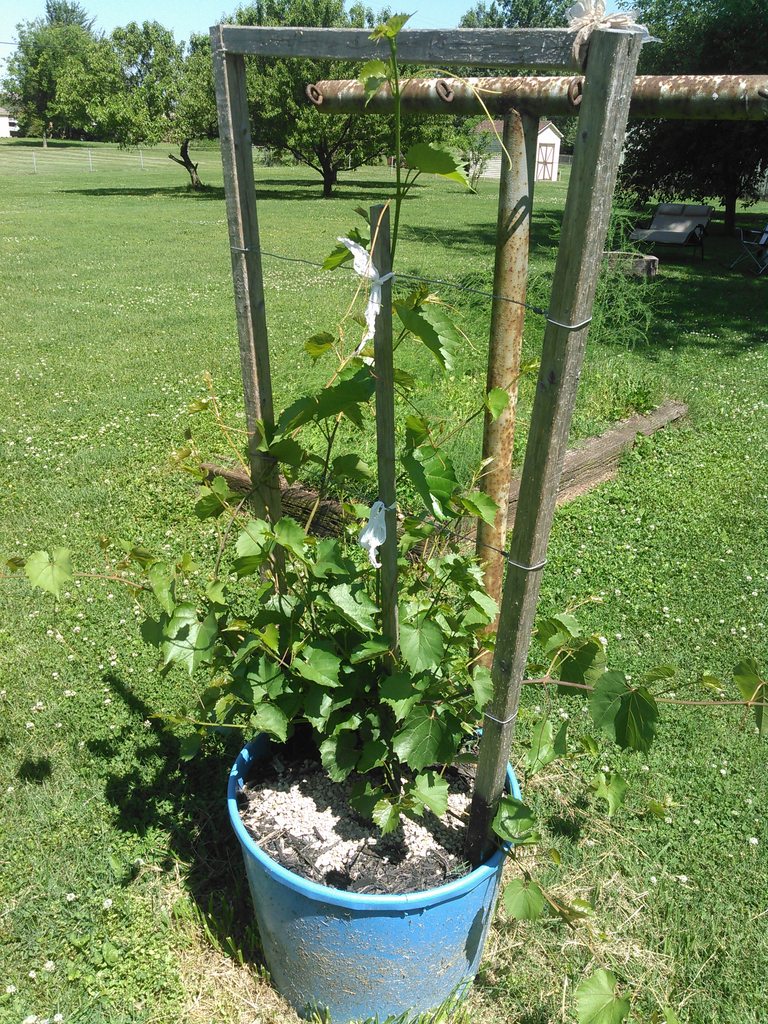 The canes cut off were thrown in the bin if they were less than 1/4", if over a 1/4" I cut them into two-bud sections, left a single leaf, and into the mist chamber to root they go. We'll see what happens.

This vine is a Reliance table grape-also chewed off, and cut back to clean up. 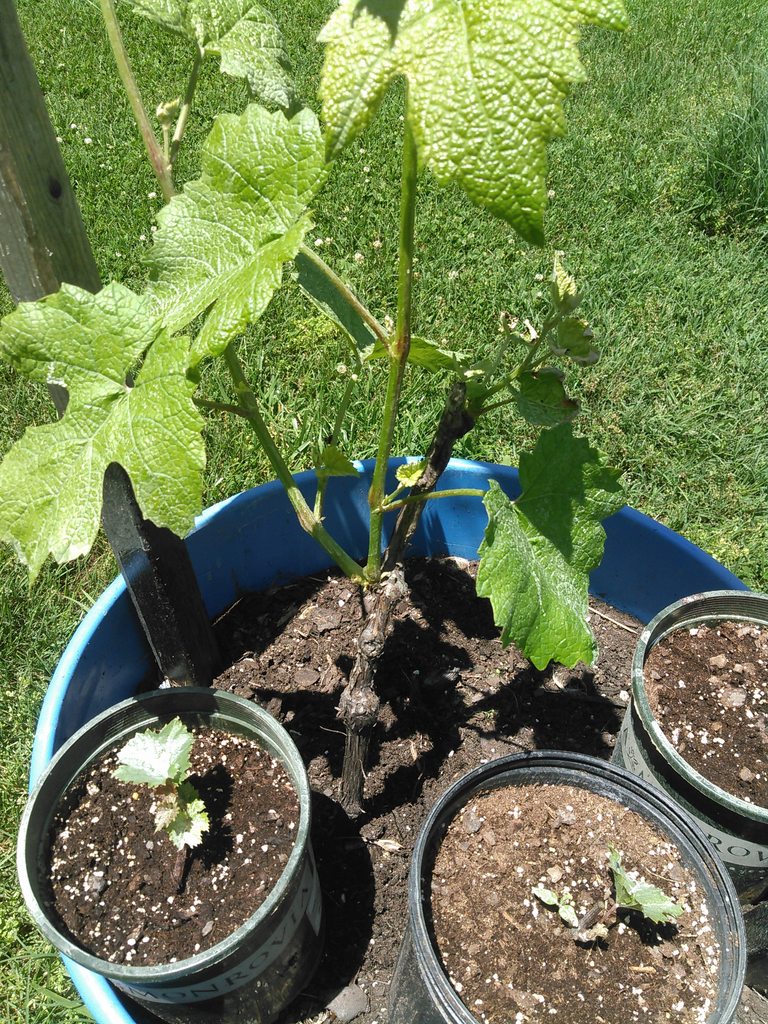 I selected the cane that grew in the straightest, and started training it back up to the wire two weeks ago. 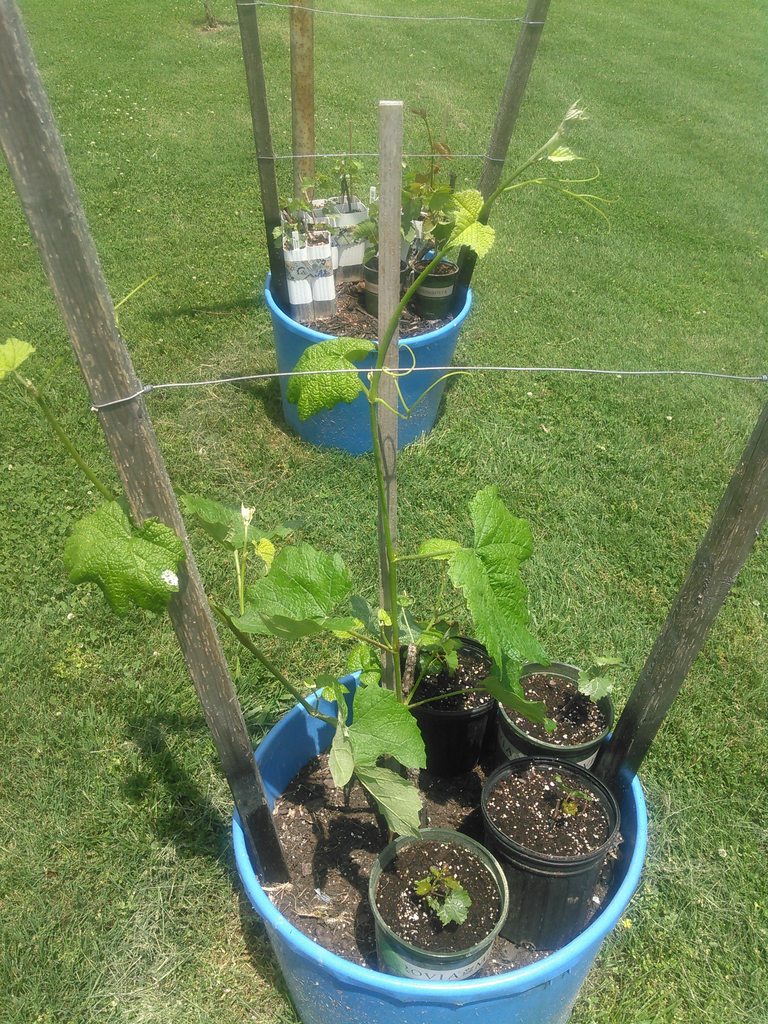 This is the other rootstock vine that got chomped. Another 3309C, but it's in rougher shape and is struggling a bit to come back. 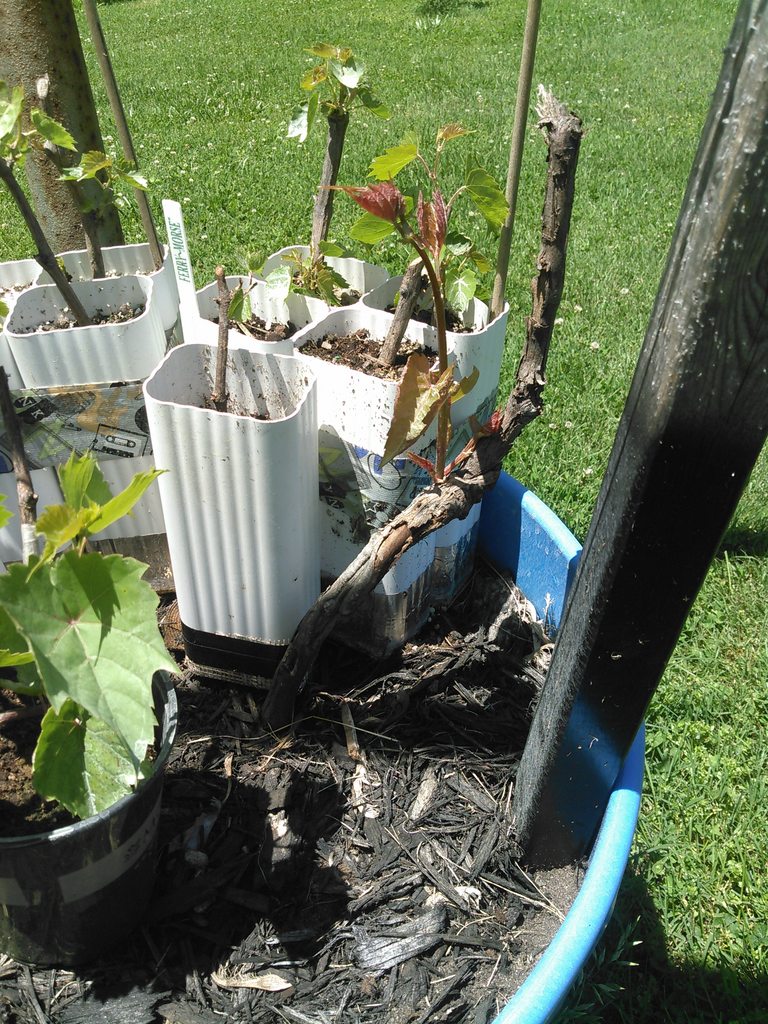 But, then we have some success stories too! These two vines were the only two grafted vines that I did that took, healed, and grew, that the dog didn't get at. They are a suspected hybrid, Chambourcin X Malbec. Found growing under the malbec vines, they have the strong upright growth habit of malbec, the fruit is malbec-like in flavor, but the leaves and bunches are VERY chambourcin shaped-and-sized. I wish I had a photo of last year's growth-it was very clear the two vines were not the same! 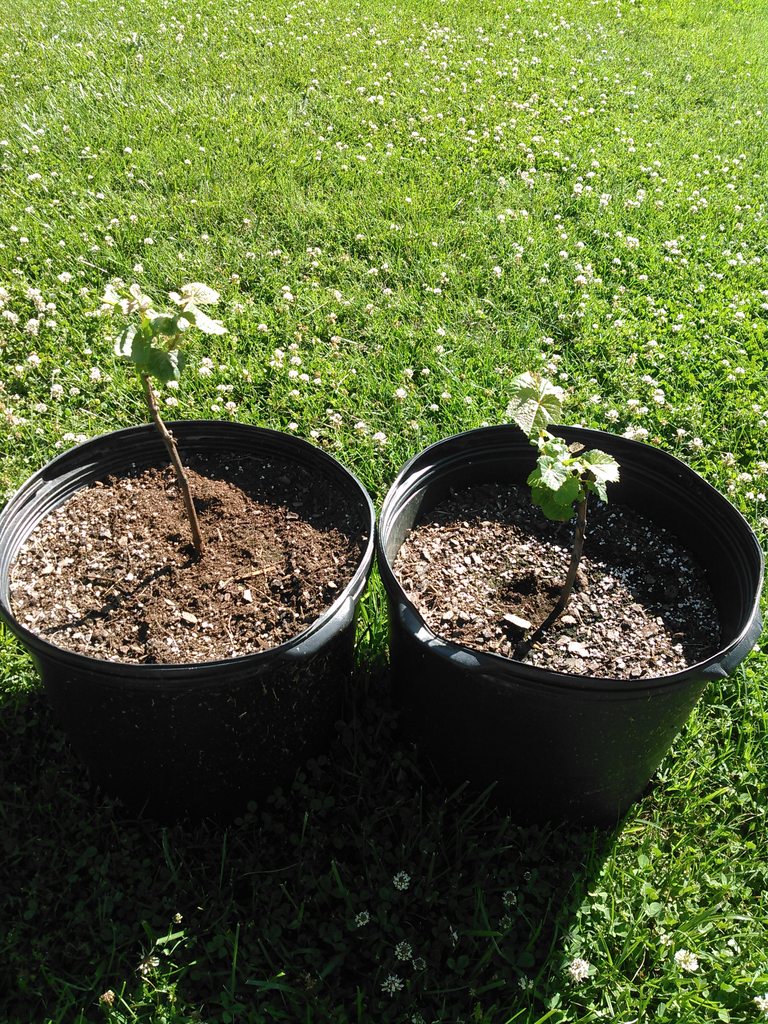 These vines are in 6 gallon pots, and were grafted in early april, right before budbreak. I took fresh cuttings of 101-14 and the suspected hybrid and was worried they might be TOO late!

My grafting needs a lot of work. The next two images are close-ups of the graft, as taken by my potato-phone. 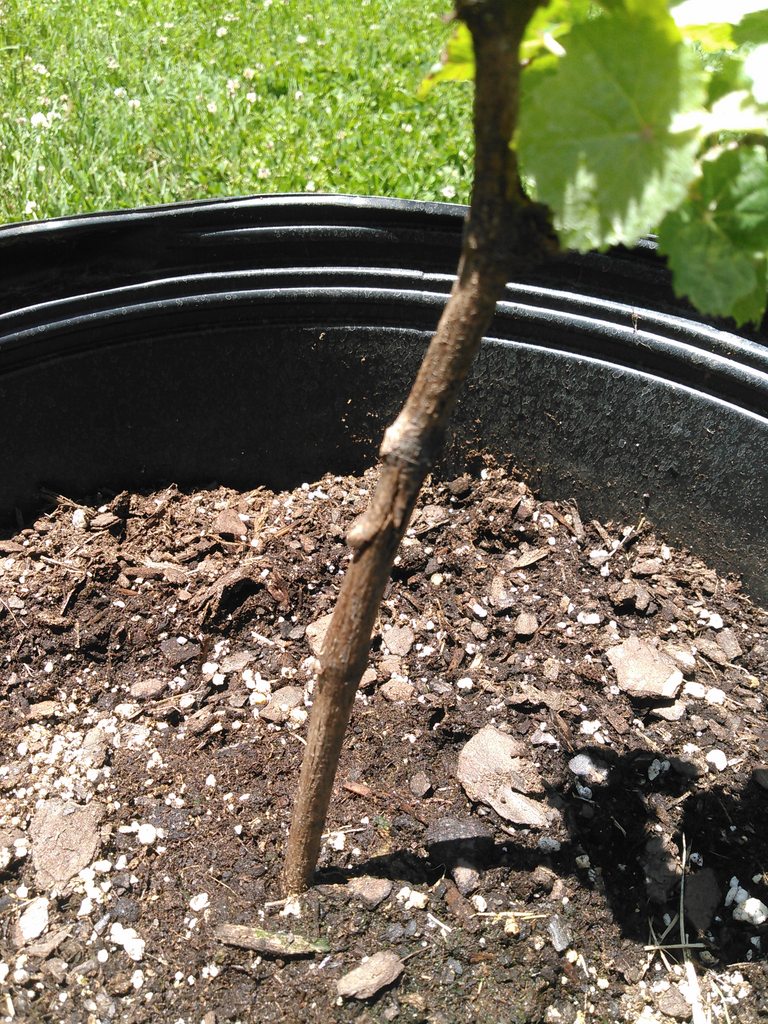 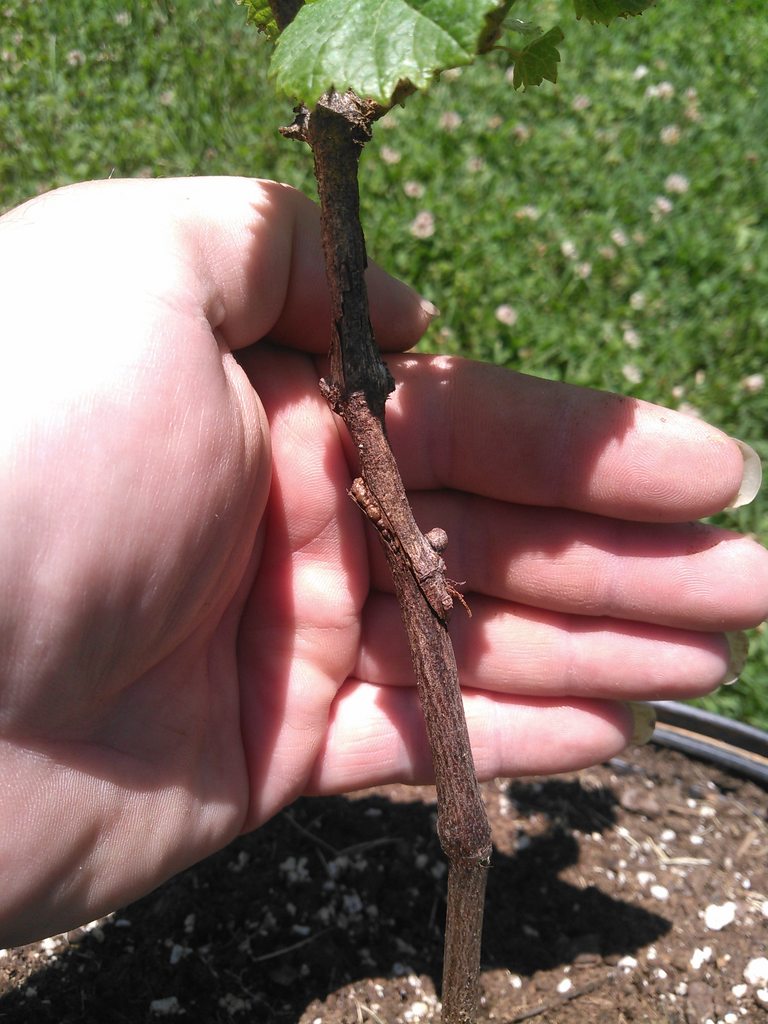 At least they're growing. This year, when they go dormant, I'll transplant them up into their final container size and install the trellis frame.

Hope your luck is better this time around. I’m curious about your ‘suspected Chambourcin x Malbec hybrid’ where did you get it? Is it a chance seedling or did you pollinate it? If it grows out for you this year, or next I’d like to ask for a cutting or two. At my age I’m too old to wait years for breeding. I’ll be long gone before any seedlings would grow out. If you plan to root the cuttings yourself, no worries. I have too many vines to grow as it is. But always on the lookout for new hybrids with potential. I also belong to the grape breeders group. There are some experts there who can also assist.
Skash
X

It is a chance seedling from the university vineyard. The only two varieties in that block are Chambourcin and Malbec, and this grape is neither.

It is possible, but unlikely, that it is a cross against 101-14, as it is a female flowered variety, but we won't know for a bit. The original "mother" vine was destroyed when that whole block was raized later that day. I was there to get cuttings by sheer luck, I didn't know about the scheduled replanting.

I'm also on the grape breeders group. One of my projects is to gather some of the female flowered Couderc rootstocks and cross them against some of the newer eastern European varieties. Currently I have a single surviving cutting of Andre, once it grows out this year I will try to graft some plants to evaluate it.
Last edited: Jun 7, 2020
X

Speaking of the group, this is one of my wild collections that I have not yet identified. I got it from next to the air conditioning unit where I worked at, and it has been very difficult to get to root. I suspect V. Aestivalis, just going by the leaf shape and the difficulty in rooting-it's been 5 months and it's still green and growing, however last I checked there are no roots on it and it takes a LOT of water to keep it from wilting. I just keep watering, it stays green. We'll see. 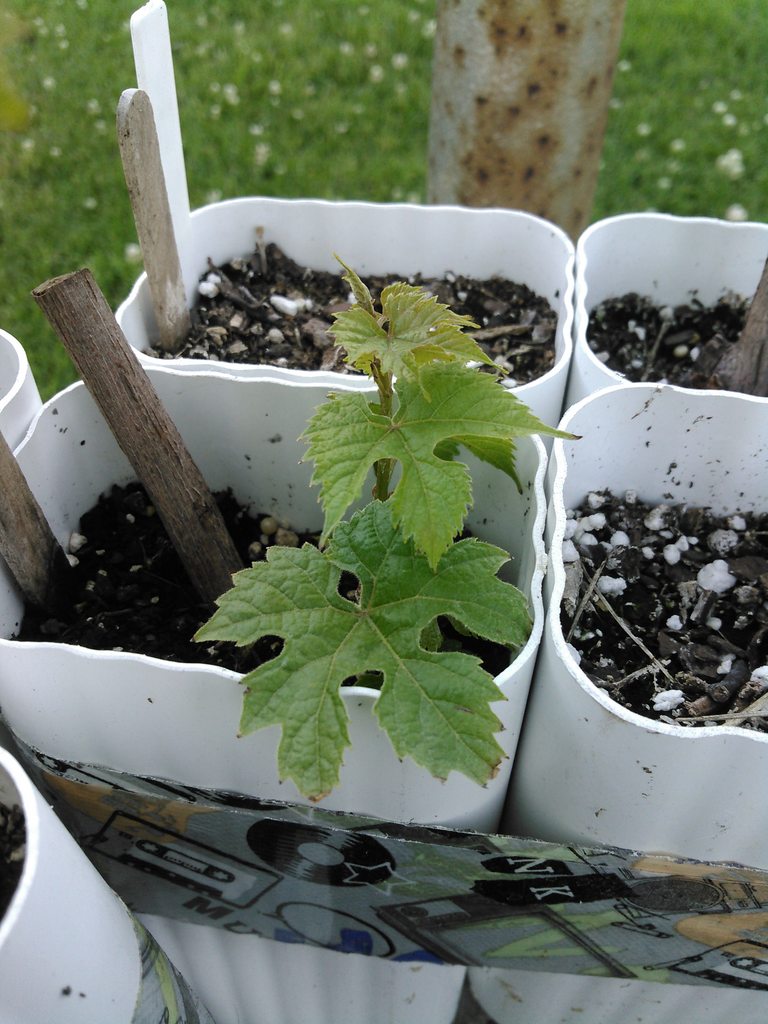 I've also got 8 rooted cuttings of Landot Noir, these are not grafted and I am unsure of their suitability for growing here on their own roots. 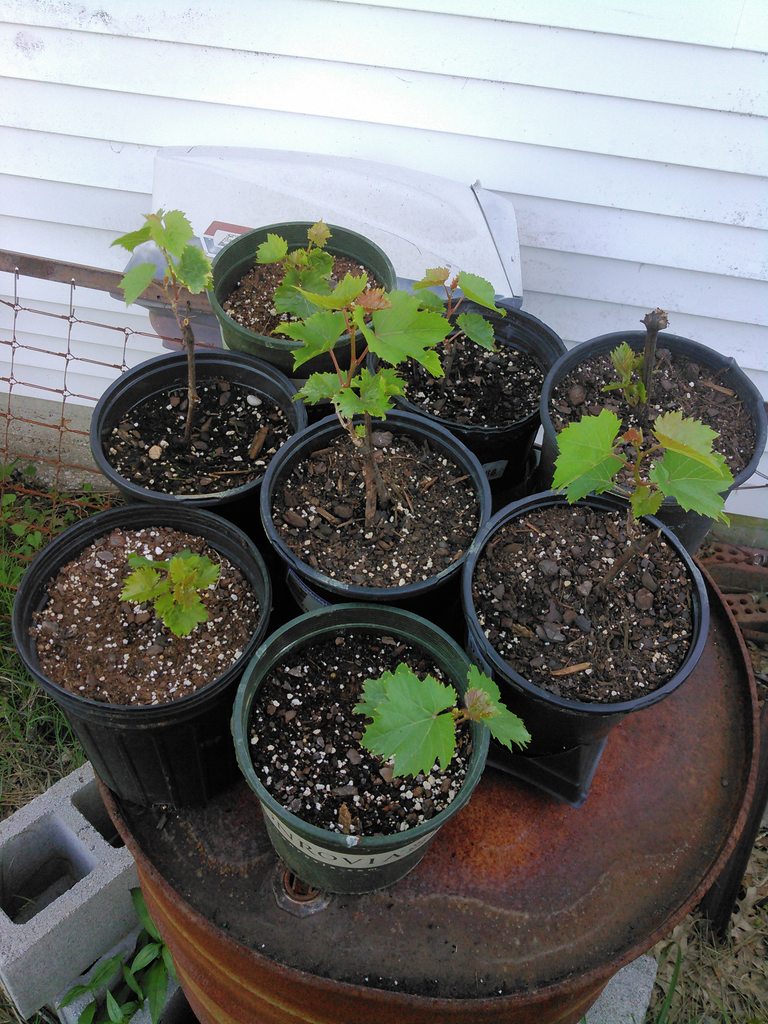 And then we have (mostly) the shards of vines that the dog ate. These were clipped clean, dipped in rooting compound, and stuck into the dirt in 8" tall sections of plastic gutter downspout. Almost all of these are 3309C, two of them are 101-14 and then the one V. Aestavalis. All of them except the Aestivalis are rooted and growing well. 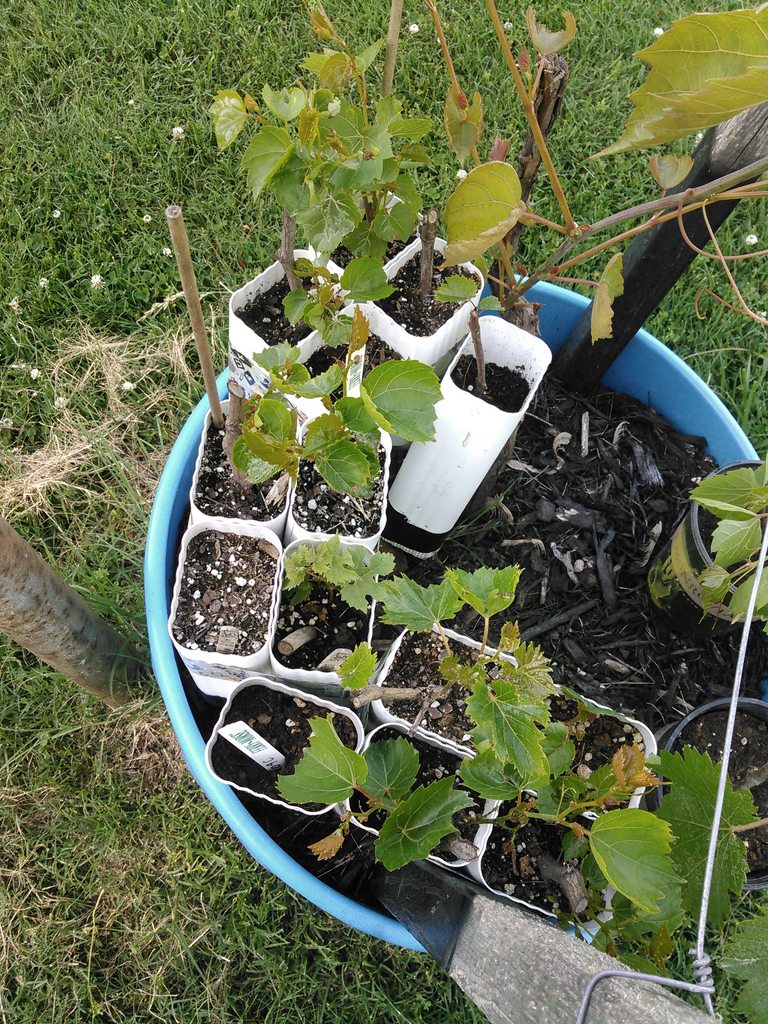 All of these, except the one Hoshino cherry tree cutting in the round black pot front left, are 101-14. They're going to used for field grafting practice, next spring. Hopefully chip-budded with Andre! 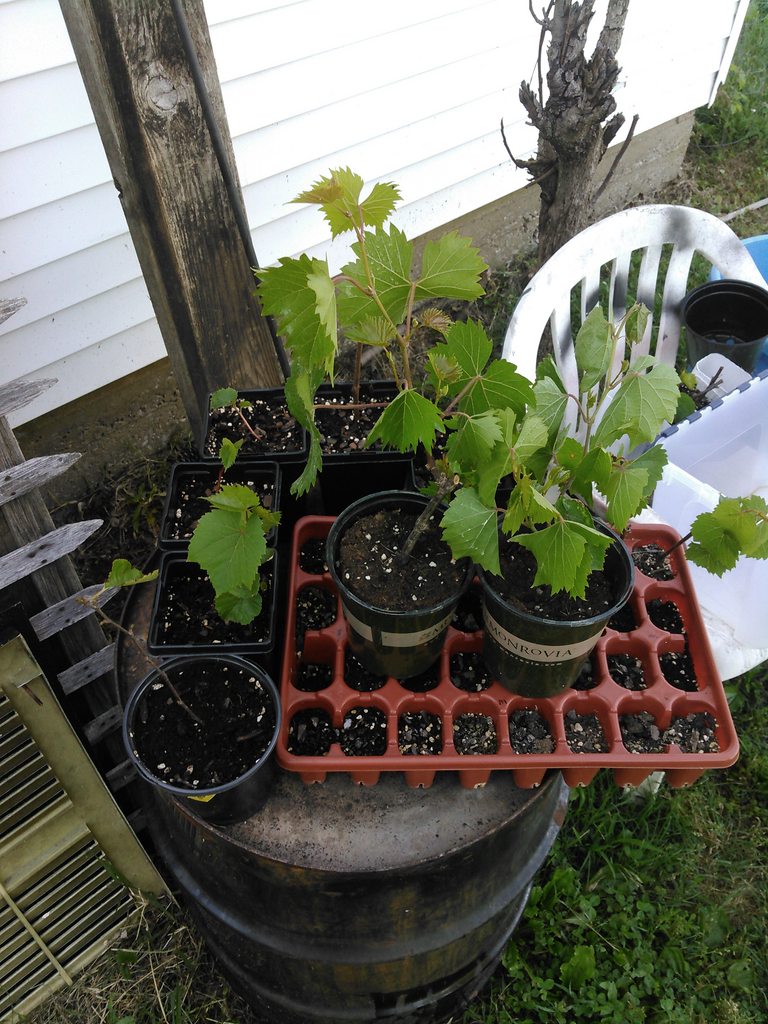 And the one cutting of Andre. This was a failed last ditch attempt at a split graft-the cut was bad and the rootstock split the next morning, so I plucked the (one bud) scion out, sliced the faces again, and stuck it in a pot of dirt on the heat mat with the Landot Noir cuttings. It fuzzed out some roots, so it's in the pot and growing now. I grafted 15 of these, all of the buds popped and grew out, but none of them actually took. It was difficult and expensive to get into the states, and had to come with a LOT of paperwork and import permits. (and money! USDA loves their money...) Hopefully this one will grow and survive long enough to get a few dozen grafts to live. 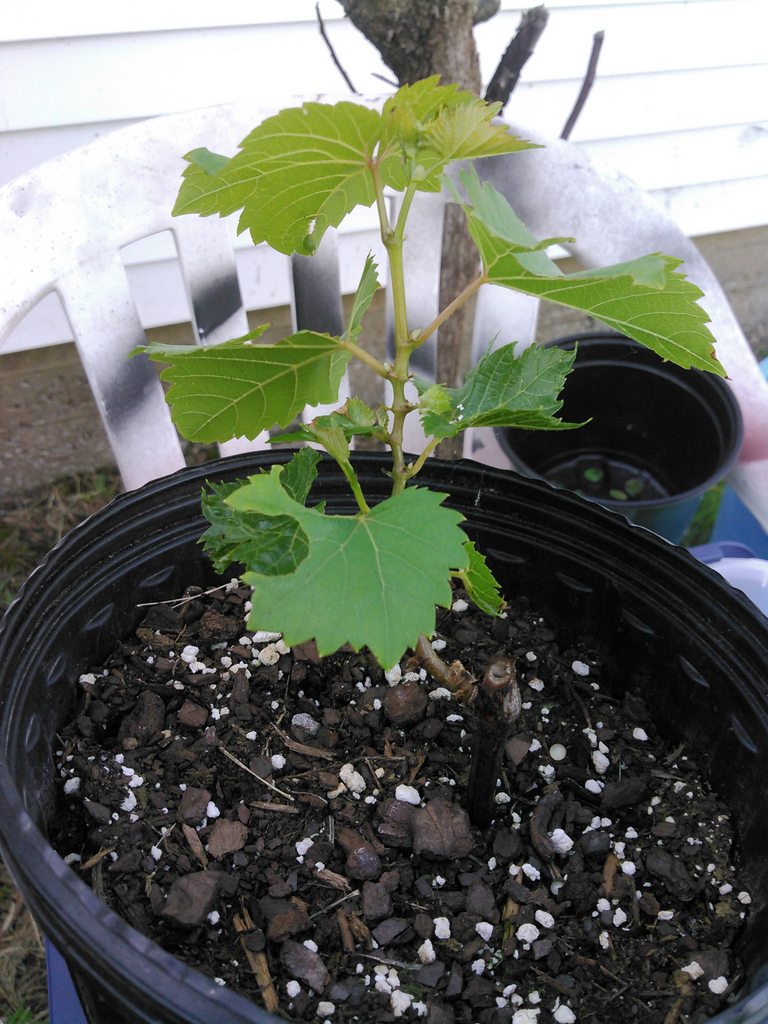 The plan is to cross Andre, Merzling, and Rathay with 101-14, Landot Noir, 1616C, and V. Aestivalis, and try to get something that is fungus resistant enough to grow reliably well in Kentucky. I am still having trouble obtaining Merzling and Rathay, but maybe someday.