Good bye Gene. We thank you

We lost another American hero yesterday.

Gene Cernan lived to the ripe old age of 82

He was a crew member of Gemini 9 in which he had a challenging space walk,

He was the lunar module pilot on Apollo 10 where he performed a "dry run" of the famous Apollo 11 moon landing, taking his LM to within 8 miles of the moon. On that flight NASA intentionally partially filled the LM fuel tanks to ensure that Apollo 10 could not actually land. They knew the kind of guy Gene was, and wanted to remove all temptation.

After Apollo 10, Gene turned down an assignment to the crew of Apollo 16 in favor of a later flight where he would be the commander. This was very risky since budget cuts were already happening. This is just the kind of guy he was.

He was, as a result of a lot of shuffling, assigned to command Apollo 17 (the last moon mission) and finally got to walk on the moon.

I always like the story of "who was last on the moon?". The answer really depends on who you ask.

If you were to ask Gene, he would unquestioningly say that it was himself. At the end of their last EVA, Schmitt (the lunar module pilot) got back into the LM first. This left him alone, on the moon.

If you were to ask Schmitt, he would unquestioningly say that he was the last. The commander (Gene) got out of the LM first, and then soon after Schmitt. Therefor, it was Schmitt, and not Cernan, that was the last on the moon.

.. And if were to ask the folks in the control room at NASA, they would say that they landed on the moon (in the LM) at the same time, so they BOTH were the last.

Just goes to show you how strong points of view can be.

There are now only 6 moonwalkers alive.

Good by Gene, and we thank you and will always remember your words..

...America's challenge of today has forged man's destiny of tomorrow, and, as we leave the Moon at Taurus- Littrow, we leave as we came and, God willing, as we shall return, with peace and hope for all mankind. Godspeed the crew of Apollo 17. 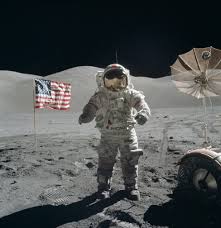